THIS ARTICLE FIRST APPEARED IN FUSSBALLSTADT.COM ON AUGUST 12TH 2017

Leeds have targeted Hamburger SV’s striker Pierre-Michel Lasogga. Jon Mackenzie takes a look back at a career that was not always straight forward.

Leeds United are commonly referred to as a sleeping giant by aficionados of English football. Being the prototype for the ‘club-spends-well-above-its-means-and-comes-crashing-down’ model of financial management that would become so common in the early 2000s, they have spent the last decade outside of England’s top division.

Over the summer period, however, a new owner, Andrea Radrizzani, has attempted to disturb the sleeping giant into some wakefulness. With a seemingly endless supply of funds at his disposal, he has assembled a squad (with a backroom staff to match it) that looks like it could take the Championship by storm this season. 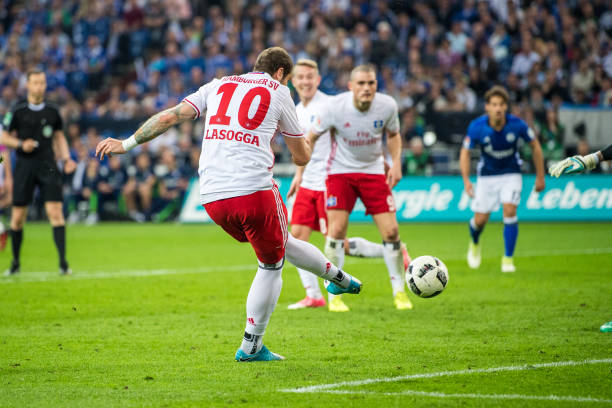 Pierre-Michel Lasogga scored many important goals for Hamburg, but injuries have also meant that he struggled to play consistently. (Photo by Lukas Schulze/Bongarts/Getty Images)

Where there is a weakness in the side, though, is in the forward area. During the transfer window, new head coach Thomas Christiansen brought in youngster Caleb Ekuban from Chievo Verona as back up for the prolific Chris Wood. But beyond that, with Marcus Antonsson and Souleymane Doukara being told they are surplus to requirement, Leeds are clearly in need of something a little bit more substantial to offer as an alternative to Wood. With this in mind, the club have been keeping close tabs on Hamburg striker Pierre-Michel Lasogga throughout the transfer window and are now thought to be moving to sign the twenty-five-year-old from Gladbeck.

Lasogga – A Promising Career that Never Quite Delivered

Just a brief glance through Lasogga’s CV to date and you find a litany of some of the finest clubs in German football. In a youth career that spanned such teams as Schalke 04, VfL Wolfsburg and Bayer Leverkusen, Lassoga excited development coaches around the country. It was at Leverkusen that he got his big break, scoring twenty-five goals in twenty-five appearances for their U19 team, a run of form which helped Die Werkself make their way to the national finals. This impressive return earned the youngster a place both in the Leverkusen reserves and the German U21 side, but he would never again manage to maintain the same goal-scoring prowess at any point in his career after that point.

Leverkusen was quickly replaced by Hertha Berlin for Lassoga, who soon made his way from the reserve team into the full side. At the time that he joined, Hertha BSC were still in the Bundesliga 2, attempting to make a return to the top division after being beset by financial difficulties in the 90s. In his first season at the club, Lassoga would score thirteen times in twenty-five appearances, a yield which would earn the club promotion into the Bundesliga in 2011.

Already, though, the signs were there that Lassoga’s body might not be resilient enough for a career at the highest level of professional football. Even at the beginning of his time at Hertha BSC, he was already picking up injuries with unusual regularity to the point that, at the end of his second season at the club in May 2012, he suffered an ACL tear which ruled him out well into the following season. In fact, it wasn’t until February of 2013 that he made his return for Hertha and by this time he had fallen out of favour with the management at the club, only making six more appearances that season. It was becoming clear that his best opportunity would be to move elsewhere.

This step came in the form of a loan opportunity to Hamburger SV where Lassoga soon settled back into the Bundesliga. A hattrick against 1.FC Nürnberg early on in his spell there set the tone for his time on loan with the club, a loan which was rapidly extended to a full contract at the end of the season after he hit double figures on the scoring front. With a five-year deal secured which netted him the improbable sum of €3 million per year, a lot was riding on the fledgeling forward. But after that remarkable loan period with the club, the goals dried up. The injuries, however, did not.

Three years on, Lassoga has become what they call in Germany a ‘contractual corpse’: a player on a high wage agreement who is no longer central to the club’s plans. With Hamburg coach, Markus Gisdol, ruling him out of his plans for the season, the club are keen to sell the player on to recoup his wages for the rest of his contract. This adds a level of difficulty to Hamburg’s attempts to move the player on, especially to a club in the English second division like Leeds United. As a result, the German side have offered to compensate the eventual wage agreed between Lasogga and Leeds.

Having already been spotted breakfasting in Leeds with Felix Wiedwald, who was signed by the Yorkshire club from Werder Bremen earlier in the summer window, it appears as though a deal for the striker could be imminent. Supporters of Leeds United will be looking back on Lasogga’s time in the German second division and hoping that he can reproduce the same kind of form that got Hertha BSC promoted into the Bundesliga. Both his height and strength would recommend him as a reasonable prospect in the Championship. Where the nervousness emerges is at the point at which his medical records are scrutinised: for a club who need a back-up striker to come in late on in the transfer window, a player who has been plagued by injuries throughout his time in football (and serious ones at that) might represent too much of a gamble.

At this point, though, it may be worth the risk for the Championship side who are aiming to finish their season in one of the Play-Off spots with a chance of promotion into the Premier League. If Lasogga can be kept fit, he would offer an excellent option for Thomas Christiansen off the bench. And were he to help them into the top division in English football, there is little doubt that Leeds United would forgive him his high wage bill.

iThere are no comments

Begin typing your search above and press return to search. Press Esc to cancel.