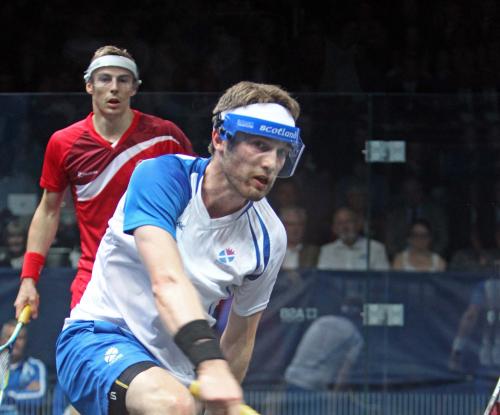 THIS ARTICLE FIRST APPEARED IN VARSITY ON OCTOBER 9TH 2015

arry Leitch is one of those annoying sorts of people. At an age where most people struggle to fill their LinkedIn profiles with what little they have achieved in life, he has a whole Wikipedia page devoted to his accomplishments. With a Cambridge medical degree supplemented with a PhD intriguingly titled ‘Pluripotency and the germline’, he is currently continuing his research in epigenetics and stem cell biology at the MRC Clinical Sciences Centre on the Hammersmith Hospital campus. He is also a Scottish international squash player and holds representative honours at three Commonwealth Games (twice finishing fourth in 2010 and 2014), three World Team Championships and six European Team Championships. Worst of all, however, he is also eminently likeable.

We meet at a bar in Shepherd’s Bush which is precisely engineered to look as though it hasn’t been precisely engineered and all the beers have names that could be titles of Don DeLillo novels. In between our first drink (Vagabond, since you’re asking) and the third (the now satirically apposite Dead Pony Club), I entirely forget that I am supposed to be conducting an interview. For all the ease of conversation, I could be out for a Friday night drink with an old friend. By the end, I’ve stopped recording the conversation because the presence of the Dictaphone on the table feels slightly incongruous.

This is not really an interrogation but a conversation from which I emerge feeling enriched. At times it feels like Harry is interviewing me. Any pre-rehearsed line of questioning goes out of the window. We talk sports, politics, university, science, Cambridge life—each topic intertwining with another so that a discussion about the NHS ends up at Everton Football Club (Harry is a fan) via Andy Burnham and Hinchingbrooke Hospital (where Harry worked during his medical training).

The bar is full. We share a table with two men watching YouTube reruns of athletics events on their phones. Harry is a softly-spoken Scot. He talks quietly with an understated Edinburgh inflection evocative of a Ewan McGregor attempt at an English accent. Yet as he talks, his voice cuts clearly through the chunter of background noise. Listening back to my recording, he is mostly drowned out by our tablemates’ lengthy discussion of Katarina Johnson-Thompson. But in the moment I have no problem hearing him. He speaks with a quiet self-possession that conveys the curious combination of normality and yet exceptionalism that he exudes. For whilst he blends seamlessly into the craft-ale background of an up-and-coming London clientele, at times the remarkable nature of his life breaks through and reminds me that I’m sat not with an old friend but in the presence of an extraordinary individual.

‘I’ve seen this in Andy’s game too.’ We’re talking about the particularities of doubles racket sports. In the last two Commonwealth games, Harry has been paired with Alan Clyne, a fellow Scot who is currently ranked twenty-eighth in the world. Alan, it transpires, is a quiet guy and Harry finds himself toning down his self-confessed ‘boisterous’ nature on court in order to prevent any negative repercussions on Alan’s game. ‘In doubles,’ he says, ‘you’re not playing for yourself—you’re playing for the other person too.’ This leads him into his anecdote about Andy. The Andy in question is Andy Murray who, as Harry views it, was careful to dampen his natural expressivism on court out of deference to Laura Robson, his playing partner for the course of his mixed doubles Gold at the London Olympics.

Something about the normality of the first-names-terms ‘Andy’ makes me inquire further. It soon transpires that, as a youngster, Harry’s talents were not limited to squash but extended to racket sports in general, a circumstance which led to his attending the same junior tournaments as the Murray brothers.  Looking back, Harry recounts the general feeling of scepticism that attended the decision to send Andy, the younger brother, to Barcelona to continue his education. ‘It was seen as a big gamble. There was no guarantee that he would make it at that point but it was easy to forget how good he really was. He was playing opponents three years his senior and was still winning.’ And yet, even in the wake of this disclosure of famous acquaintances, Harry retains his guise of normality. ‘I’ve spoken with Judy (Andy’s mother and the boys’ coach) since then,’ he tells me. ‘She remembered me. I’ve thought about getting in touch with Andy but I’m sure he’s forgotten me.’

It is this self-effacement that plays into the infectious congeniality that constantly breaks through as the interview progresses. ‘What would you most like to be remembered for?’ I ask him, in a bid to force him into a Sophie’s Choice between his academic aspirations and his sporting accomplishments. ‘I doubt I’ll be remembered for anything!’ he replies, grinning. The relentless modesty continues. ‘I’m not the most talented squash player in the world. I was a decent junior—a good international junior—I would back myself to be in the top fifty. Top thirty? Twenty? Yeah maybe I could have made the top thirty. Higher? No—not without incredible luck.’ This is all barefaced understatement. The ‘good international junior’ was Scotland’s best youth player in 2002 at a period in which the world number one was soon to be a fellow Scot. And which player isn’t reliant upon luck in some form to reach the upper echelons of a professional sport?

The self-effacement bleeds into other areas of his life. In speaking of his work as a medical biologist, Harry is equally unpretentious in his assessments. ‘Again, I’m not the smartest but I work really hard.’ When he speaks about science, the same sense of satisfaction surfaces that emerges as he talks about his squash career. ‘The little bits I’ve contributed to the world in terms of research, you can’t get rid of that.’ He speaks of science with a hushed sort of reverence, a respect which leaves you in no doubt that he feels how privileged he is to be able to say, ‘there is a little bit of biology that is mine’.

Science, it appears, offers Harry a framework through which he can interpret his day to day life. He repeatedly informs me that, when making decisions, he ‘goes with his gut’, but in each case he leaves me doubting my own basic anatomical assumption that the gut is in the abdomen and not the head. For example, his decision to focus on medicine rather than squash seems entirely reasonable: ‘I’m a better researcher than I am a squash player,’ he admits. The subsequent decision to turn his attention to doubles squash followed on from this realisation: competing in the doubles format allowed him to continue to compete at the highest level and continue his academic studies. There was no Faustian pact here but rather a Pascalian wager—a measured response to the prima facie evidence with which he was presented. I am convinced that, had he wanted to, he could have been a highly successful senior singles player. But I am equally convinced that he couldn’t. Perhaps the closest he comes to resolving this paradox comes in his admission that he ‘didn’t have the ego’ to pursue squash at the highest level.

International squash’s loss was Cambridge University’s gain. Despite his accomplishments on the world stage, Harry clearly values the sporting traditions that are part and parcel of Cambridge life. Ten blues down the line, he finds himself in the record books—a record that will almost certainly stand unbroken for many years to come. Harry loves the ritual of blues sport. He’s a fierce advocate of the recognition of the ‘on the day’ performance of the blue and claims that he has become increasingly conformist in his thinking about this quirkier aspect of Oxbridge life—‘it’s actually one of the few areas where I am conservative’. Even a claimed Scottish aversion to age-old conventions could not diminish the importance of the blue in his eyes.

That notwithstanding, his experience of the Cambridge sporting scene has not been an entirely happy affair: there have been run-ins with the blues committee and senior members of the university, a number of whom were reluctant to allow him to compete for his record-breaking ninth blue. In the end, ‘it took someone from Oxford to say I should play’—an incident which clearly had an affect on Harry and which he seems to view as a confirmation that the best interests of the sport can be maintained even in the face of a centuries-long rivalry.

Hearing this story and others like it, it feels like the university has wasted its opportunity to make the most of Harry Leitch. Harry is, on paper, a model student: someone who recognises the distinction between education and qualification but who, in spite of this, has pushed hard to achieve academic excellence as a complement to his sporting achievements. The work ethic to be able to accomplish this is undeniably phenomenal—three times during his university career he took time off to compete in Commonwealth games. However, as soon as tournaments ended he was back ready to sit exams and progress his medical training to the next level. He is the walking-talking instantiation of the mantra ‘work hard, play hard’, busting the myth that gaining a Cambridge degree should come at the cost of any dream of sporting excellence. And yet the university has largely ignored him.

It’s not simply that they haven’t asked him for his advice—they actively ignored it. He tells me how he tried speaking to those involved in the development of the West Cambridge Site Sports Centre (a facility in which there are five squash courts). ‘There was no interest there at all. I feel like I’ve got quite a decent perspective. But I felt quite under-utilised in that respect,’ he admits. It’s clear that there is no bitterness here on Harry’s part. What materialises is more a frustration that there is so little willingness by the university to engage with the untapped opportunities that are available to them. As we talk, a deeper point seems to emerge: perhaps it is the case that the increasing corporatisation of universities within the contemporary world has led to the occlusion of the ‘extra-curricular activity’ by the more marketable ratios of degree results and future employment opportunities. But this idea is never quite articulated because at this point our food arrives and we turn our mind to more pressing matters.

As we eat, I ignore the intense urge to congratulate myself that an international sports star might enjoy the same unhealthy diet as I do and ask him one final question: ever thought about giving it all up? He looks up. ‘I’d love to get a medal in the Commonwealth games.’ He catches himself here, almost shocked that the thought has been verbalised, before retracing his steps and raising the question again: ‘Do I still want one?’ He pauses, momentarily. ‘Yeah I do.’ And that’s that. In his matter of fact way he’s suggested that he’ll be there next time around. And yet the fire in his eyes leaves me in very little doubt.

iThere are no comments

Begin typing your search above and press return to search. Press Esc to cancel.